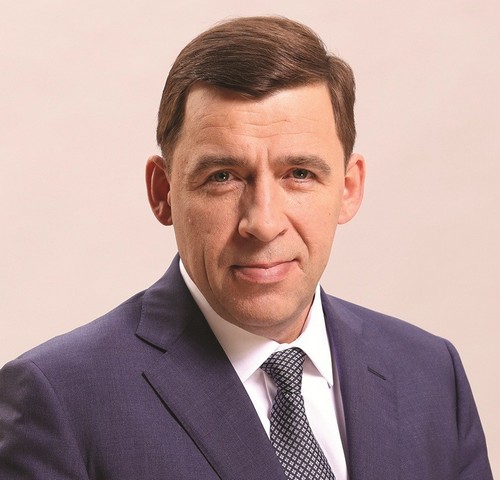 Yevgueny V. Kuyvashev is a Russian statesman, the Governor of the Sverdlovsk oblast (since 2012). Before he worked as the Plenipotentiary Envoy of the President of the Russian Federation in the Ural Federal District (2011—2012), Head of the Administration of Tyumen (2007—2011) and Tobolsk (2005—2007).

He was born on March 16, 1971 in the settlement of Lugovskoy of the Khanty-Mansi district (Tyumen oblast).

He obtained higher education: in 1999 he graduated from Moscow Military Institute of the Federal Border Service of the Russian Federation; in 2010 he followed a retraining course ‘State and Municipal Government’ at Tyumen State University.

His major discipline was jurisprudence.

His qualification is legal worker.

After his work at Surgutremstroy and service in the Soviet Army he studied at Tobolsk Medical College and then moved to the settlement of Poykovsky of the Nefteyugansk district where he worked from 1997 to 2005 at the settlement administration, including as the Head of it.

In 2005 he became the Deputy Head of the Moscow Directorate of the Federal Bailiff Service and the Deputy Chief Bailiff for Moscow.

From December 2005 to July 2007 he worked as the Head of the Tobolsk Administration.

From July 2007 to January 2011 he was the Head of the Administration of Tyumen.

On 29 January 2011 he was appointed Deputy Presidential Plenipotentiary Envoy to the Ural Federal District by order of the Chief of Staff of the Presidential Executive Office.

On 6 September 2011 he was appointed Presidential Plenipotentiary Envoy to the Ural Federal District.

On 14 May 2012 he was appointed acting Governor of the Sverdlovsk Region.

On 29 May 2012 he was confirmed as Governor of the Sverdlovsk Region.