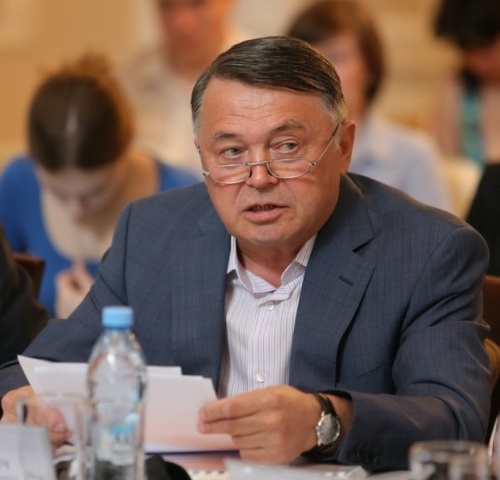 Position:Member of the Board of Directors
Employer:Sverdlovsk branch of the Union of Architects of Russia
Country:Russia

In 1973 -1979 worked at the Urals Electromechanical Combine. Took part in designing of industrial, administrative and civil facilities of the combine.

In 1979 -1993 Mr. Vyatkin worked at the Bureau of Expertise and Improvement of Design Solutions of Glavsreduralstroy. During his time at the Bureau he participated in the expertizing of projects aiming to improve design solutions of a number of major industrial facilities of the region. Received a commemorative sign of the Exhibition of Economic Achievements of the USSR and was admitted to the association of expert advisers of Gosstroy of the USSR in recognition of his acheivements.

Since 1993, Mr. Vyatkin works at the Department of Architecture, Urban Planning and Land Use Regulation of the Administration of Ekaterinburg, at first occupying the position of a Deputy Head of the Directorate, and since 1996 - as the Department’s Head.

Mr. Vyatkin participated in the development of projects of development of new residential neighborhoods of Ekaterinburg: "South-Center", "Central Passage", "Northern Khimmash", etc., as well as the major public and commercial facilities of the "Yugo-Zapadniy", "Dirizhabl", "Park House" shopping centers. He directly participated in the development and approval of the Master Plan of the "City of Ekaterinburg" municipality for the period until 2025, which received awards at the All-Russia Review Contest in 2005. Mr. Vyatkin was awarded the Laureate Diploma of the Tatishchev and de Gennin Prize for the "New Master Plan of the "City of Ekaterinburg" municipality” project.

In 2011, Mikhail Vyatkin was awarded the "Honored Architect of Russia" title by a Decree of the President of the Russian Federation.