The main event for October 31, Day 2 of 100+ Forum Russia, was the plenar session of the forum Future City 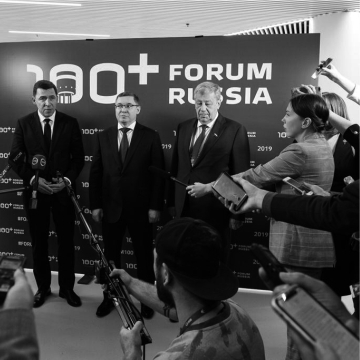 Vladimir Yakushev noted the significance of the theme of the forum. "A Future City is a city in which people have ample opportunities for self-fulfillment. A cozy city that makes people smile when they walk outside. A city where there are no challenges connected with private and public transport. A city with an adequate social infrastructure. A city where people feel safe. Where they do what they love. Where they have a job. Where they parent their children. Ministry of Construction considers it a priority to make Future Cities cities that we already have today", said the Minister.

Evgeniy Kuyvashev emphasized that "cities are a major factor when it comes to development of modern society and economy both on global and regional levels. Improvement of quality of citizens' life is inextricably connected with the present and future states of cities".

In his answer to the quesiton about "the Future City", Arkadiy Chernetsky noted that the main criteria for it are convenience and safety. He also emphasized that "one of the main matters to be dealt with when it comes to future cities is that of safety".

One of key events of the day was an offsite meeting of the Committee of the Federation Council on federal structure, regional policy, local self-government and affairs of the North, on the topic of Overall Development of Urban Territories as a Way of Ensuring Rising Numbers in Construction of Housing.

The business program for Day 2 included 25 thematic sessions, among which were those of Energy-efficient Technology in Future Cities. Among many of the sessions that attracted a lot of interest from delegates was one titled Transport Infrastructure Planning in Cities of the Future.

There also was an official tour of the exposition for Senator of the Federation Council Arkadiy Chernetsky, Minister of Construction Industry, Housing and Utilities Sector of the Russian Federation Vladimir Yakushev, Governor of the Sverdlovsk region Evgeniy Kuyvashev and Mayor of Yekaterinburg Alexander Vysokynsky. The tour included visits to the following booths: Prinzip, Stroytekproekt, Sinara-Development, Rostec, TBM, Mostostroy-11, LSR and NAID.

Prinzip and the delegation discussed the topic of growth in housing, Sinara-Development presented their project of the new UMMC Ice Arena. ROSTEC presented a new model of the stoplight.

According to the data from the official website, on Day 2 the total number of registrations reached 10014.

Parallel to the forum, there was a start to the business program for the celebration of World Cities Day, an event organized under the umbrella of UN-Habitat which takes place on October 30-31 in the Conference Center of IEC Ekaterinburg-EXPO.