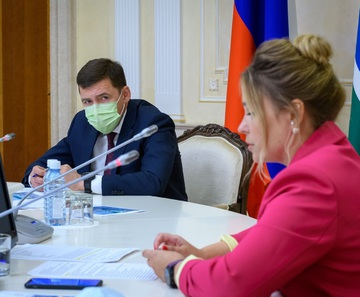 The VIII International Forum and Exhibition 100+ TechnoBuild will be held in Yekaterinburg from October 5 to 7, 2021. This year, its scale will be bigger: the exhibition will occupy two pavilions of the IEC Yekaterinburg-Expo, while the business program will consist of at least 100 sections. The concept of 100+ TechnoBuild was approved by the Governor of the Sverdlovsk Region Yevgeny Kuyvashev at the regional meeting of the Organizing Committee.

Special attention will be paid to epidemiological safety during the event. The organizing team will follow the plan created and proven successful in 2020, but also taking new factors into account. Based on the epidemiological conditions, it may be decided to introduce additional requirements for guests and participants, such as having a negative test for COVID-19 or a certificate confirming vaccination.

"Our forum is the largest in the regions of Russia. It is, in fact, an engineering and construction congress," – Yevgeny Kuyvashev recalled. – "Over the previous years, we have gained a lot of experience, which has allowed us to receive the support of the Ministry of Construction and Housing of Russia."

As Vera Belous – the executive secretary of the Organizing Committee, executive director of the Guild of Builders of Urals – said, this year will see the first instance of the All-Russian Engineering and Architectural Award 100+ AWARDS held as part of the event. The award received 154 applications from projects from all over Russia. The winners will be selected by the world's most famous engineers, architects, and designers. Among others, the jury includes Juliette Jiang, Senior Vice President of BROAD Group, Sergey Choban, head of the SPEECH architectural bureau, and Vladimir Travush, Chief Engineer of GORPROEKT.

"90% of the business program will be held live. The program is expected to feature 350 speakers, and 25 foreign speakers have already confirmed their participation, including the president of Zaha Hadid Architects, Patrick Schumacher, " Vera Belous said. – "Just like last year, the main part of the forum will be held in the congress hall. Total area of the exhibition will be 30,000 square meters."

Among the co-organizers of 100+ are the largest specialized scientific institutes of Russia – AO NIC Stroitelstvo, Tsniipromzdaniy, Glavgosexpertiza of Russia, CNIIEP of the Ministry of Construction of Russia and others. There will be architectural competitions for students and young specialists held with the support of the Administration of Yekaterinburg and USUAA.

It is expected that 100+ TechnoBuild will not only reaffirm its status of the largest industry event in the regions of Russia, but also strengthen its position, continuing to form the business image of the Sverdlovsk region. Thus, 100+ will continue to be an effective platform for builders and authorities to communicate.