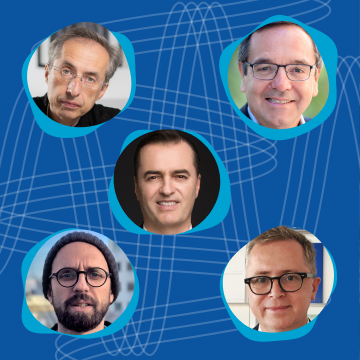 Representatives of leading architectural bureaus and the most recognized global urbanists will speak at the VIII International Forum and Exhibition 100+ TechnoBuild. The event will be held from October 5 to 7, 2021 at IEC Yekaterinburg-Expo.

Preparations for the forum and the exhibition are in full swing. The business program is yet to take its final shape. Below is only a small part of the star speakers who will hold lectures, workshops, and meetings with open dialogues for everyone.

Patrick Schumacher – CEO of Zaha Hadid Architects (Great Britain), a major architectural and design bureau. Patrick has been with the company since 1988, and since 2013 he has been a partner and co-author of all projects of Zaha Hadid Architects. The bureau's projects are ahead of their time in many ways. In 2010, Patrick, together with Zaha Hadid, received the Stirling Prize of the Royal Institute of British Architects for outstanding achievements in the field of architecture (for the project of the Italian National Museum of Art and Architecture of the XXI Century in Rome).

Gil Penalosa – founder and chairman of the board of directors of the non-profit company 880 Cities (Canada), as well as a special representative of World Urban Parks, the association of the international representative organization of urban parks, public spaces, and recreational areas. In 2020, Gil was included in the list of the 100 most influential urbanists by Planetizen, and in 2019 he received the annual World Urban Parks Annual Distinguished Individual award in Australia.

Sergey Choban – head and managing partner of the SPEECH Bureau, one of the most famous architects in Russia, who successfully works in the global market. Sergey is the author of designs for museums, residential and office buildings erected in Germany, Italy, and Russia. He has dozens of international architectural awards under his belt. For example, he designed the tallest building in Europe – the Federation complex in Moscow City (although now the Lakhta Center in St. Petersburg has taken over the record), the Coca-Cola headquarters in Berlin, the Russian pavilions on the world signs of EXPO 2015 (Milan) and 2020 (Dubai, will be held in 2021) and many other objects.

Fadi Jabri – Nikken Sekkei's (Japan) executive director for the CIS regions, the Middle East, North Africa, and India. The architectural bureau is among the largest in the world. Among the most famous projects of the company is the Central Japan International Airport (Centrair), located in the ocean on an artificial island with an area of 470 hectares.

Piero Pelizzaro – Director of Sustainable Development of Milan (Italy), as well as one of the most competent specialists in the world on climate change issues. He advises the Minister of Environment and Land and Sea Protection of Italy on the matter of adaptation of cities to climate change. He is a member of the Mayors Adapt working group (established by the European Commission to further the process of urban adaptation to climate change), a member of the advisory board of the European Union research program Ramses FP7, a member of the working group on the implementation of the FIRe 2016 project in the framework of climate policy.

Full list of speakers and the business program itself will be published on the official website of the forum and exhibition forum-100.ru. 100+ TechnoBuild will be held in a hybrid format (live and online) from October 5-7, 2021, at the IEC Yekaterinburg-Expo.