Jamie Webb: You can not design cities for cars 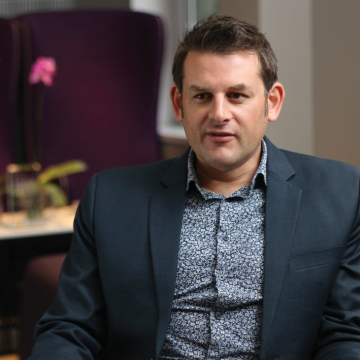 Jamie Webb is the head of the regional department of the Benoy international architecture studio (Europe, Middle East and Africa). He has been working on different continents for 20 years, specializing in the design of residential premises as well as multi-functional buildings.For example, Jamie's portfolio includes master planning and renovation of the Brains Brewery on Cardiff's Central Waterfront, where living space, workplaces, education and leisure have been woven around a central plaza and transportation hub.

In October 2021, Jamie Webb will be a speaker of 100+ TechnoBuild. In the meantime he told us why he does not believe that good landscaping will ever appear all over the world, described differences in work of an architect in Europe and Asia, and shared some ideas on how to make cities more comfortable.

– You work both in Europe and in the Middle East. Is there a dramatic difference between the two in approaches to urban planning and construction?  If yes, we would love to learn about it in detail. Where do you feel more comfortable working and why?

– Our first work was… Well, because of the qualify I live in the UK now, so I do a lot of work in the UK and Europe, less in Europe, more in the UK. I’ve lived in the Middle East, and I think I like them both, and it seems that in the Middle East there is much more freedom in terms of design. Europe is much more regulated, the restrictions and the processes are much more controlled. For example, in the Middle East because of the white projects, their levels, you have much more opportunities to be more ambitious, so in some cases I like it; in other cases it’s quite good else to have some red restrictions, so yes, I like them both. The planning process is more evolved and mature in Europe, and the places and the cities in Europe are more developed. In the Middle East you tend working with more open space, and they have less restriction on what you can do.

– Can you remember a project in the Middle East where you took full advantage of this freedom?

–Yes, about seven years ago I worked on a project for а family. We had a blank sheet of paper; a client had built some villas. They wanted to do something really different, much more sustainable, and they liked working with landscapes and had an internal landscape to build. So the idea, the concept was all about connecting with nature, a different way of living with nature. There was quite a lot of freedom to come up with different designs and ideas for that project, so we could come up with something really unique.

– In 20 years, you took part in many projects. Which one do you consider the most successful and why?
It’s quite difficult to name only one project in twenty years. I’ll probably divide my life in three phases. The project I’ve just told you about was definitely successful and unique for its time. And I also worked on a project which was finished about 14 years ago. That was a competition, a really-really different way of using materials. There are all kinds of locally grown skinbuck plants created into a magnificent organic roof, and now it is a really big tourist destination in the UK. And apart from those projects, we have projects that some people come to visit and use and some where people live. One of the projects that I’m working on in the moment is a project called King’s Row in the UK. It’s kind of not finished yet; it’s a design focus, but I think it will be really successful in the way it regenerates a forgotten part of London into something completely different.

–Are there any features that you like to implement in all of your projects? If yes, why those ones exactly? Where do you draw inspiration from?

– Well, I think there are some things that are common for lots of projects that I work on and involved in, I think they are at the heart of them – like I said, it’s about people and understanding who are the people who are using the building, so whether it’s people living there, tourists, working – you know - understanding how people use the building, and how people are going to live there, and how that actual building is going to benefit people in the long run, so that’s one. Second thing is the integration of the landscape, and what I mean by that is inside and outside spaces, so thinking about the building and the setting and people want to be in buildings, so when then weather’s in a different environment they want to be outside the building as well, so thinking about the interaction of the building and the landscape is really important. I think there are some other things that are really common in the work that I do; I’m really interested in courtyards, so in closed spaces – and obviously works on tall building and courtyards – that can have nice kind of protected spaces for offices, residential buildings, and then also buildings that are practical to be built. For me I don’t do huge amounts of work with curved geometries and complex geometries; I tend to work with simple geometries. You know, ones that are easy to build and construct, and probably that’s because I worked in parts of the world where construction technologies are not quite as sophisticated, so being able to build the design is just as important to me as the design itself, so where do I draw my inspiration from? For me at the heart of it, of every project, is taking design from the culture that you’re designing for.

–You are an active promoter of multi-purpose buildings. In your view, what key features does a space need to possess in order for everybody – from people who live in it to other users (if there are commercial and/or education spaces) – to feel comfortable?

–  So I think it’s a sort of imminence, and so for me he most important thing is when got multiple uses of the building, each of this uses has its own entrance, its way in and its own private space in there, but in order for those buildings to work as a mixed-use complex, they need to have spaces and uses where people can overlap between them. You know, rooftops whether would be restaurants, cafes, co-working space. So yes, for me it’s about shared spaces between and around the buildings, that’s the way hay they’d be successful.

–There is a stereotype that citizens of Asia and the Middle East prefer small-sized housing. Is this true? If this is the case, do you think they are trying to save space or is it, to some extent, a conscious choice of the citizens?

– In my experience people in the Middle East prefer larger spaces and larger buildings. It’s purely down to the density and population, and I don’t think it’s a choice of the citizens saying, “Hey, I think we need more spaces.” I think the cities are so densely populated that the space is at a premium, so it’s expensive, so they have to – and in fact if you look at places like London, Berlin, New York, and to a lesser degree Paris, they are also cities where housing is moving smaller and smaller because of the available space and the cost of it, and what I think what happens is in places where you access public transport and you don’t need a car and etcetera – actually where you’re less reliant on a car – you can live with a smaller environment.

– Russia is an example of old and uncomfortable urban development solutions gradually being substituted by modern ones.  Do you think the world will someday come to a point where all spaces are comfortable? How much time could it take?

–Probably no, as there are always some people who choose bad design, and clients and developers who want to do things for different reasons. So if everybody be set out with a goal to design things for people, then my answer to your question would be yes. But dirty designs of masterplans appear because of some financial processes. So the challenge is going to be how do you regulate that, how do you create enough regulation. I think there will always be some difficult places and some spaces with good and bad designs.

–What are some of the simplest steps (and, ideally, with reasonable costs) cities can take on their way to becoming more comfortable?

– I think it is really easy – stop designing cities for cars, so basically move away from reliance of vehicle, so basically prioritize people over transport. So once you do it people will come out more, there will be more interaction between people and the streets, and places will become more secure, more used, more loved. And then people can create great public spaces that they will use, like parks, gardens, squares that will be designed around people, not cars. I think, if you do this, everything else will come from it.

–What do you plan to talk about at 100+ TechnoBuild?