It's always windy near skyscrapers, and the sun burns through the upper floors: 5 myths about high-rise construction 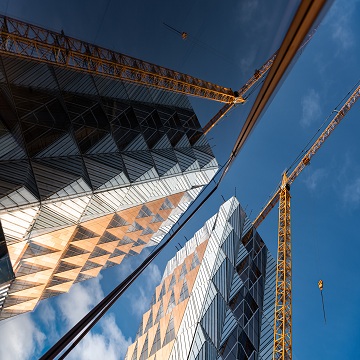 The construction of modern high-rise buildings is surrounded by many myths. Some doubt their durability, others are certain that the appearance of skyscrapers drags the standard of living down, all while making the surrounding neighborgood windier. Where is the truth and what is plain speculation? As we approach the VIII International Construction Forum and Exhibition 100+ TechnoBuild, here is the answer by the Head of the authoring team of GORPROEKT, Chief Architect Philip Nikandrov.

Myth 1. Modern "concrete boxes" will fall into disrepair as quickly as houses of the Soviet era.

Most of the Soviet buildings were built using the most budget-friendly technology of prefabricated large-panel construction, which was designed to last only a few decades. High-quality buildings made of monolithic reinforced concrete can last centuries, since such structures only gain strength with time, although they will also need renovation of the facade shell and engineering equipment due to their wear and tear.

Myth 2. It is too hot on the upper floors of tall buildings because of the large amount of glass.

The specific area of glazing may well consider the orientation of the building relative to the cardinal directions and the position of the sun. However, there are modern technologies of effective protection to minimize heat gain from solar radiation in the premises, even with solid glazing of facades. For example, these are kinetic facades with automatic shading, double thread glazing that integrates sun protection, and others. The so-called "green architecture" is focused on creating buildings that do not waste energy to combat overheating from the sun's rays, but on the contrary – receive additional energy from them.

It is true that some people are afraid of heights and never settle in skyscrapers, but most people appreciate wonderful panoramas in high-rise buildings, better natural illumination and insulation, cleaner air, and a quieter environment due to remoteness from urban highways. The higher cost of space in skyscrapers, in comparison with medium and small-storeyed buildings, undoubtedly proves their high demand.

Myth 4. Constant wind is an inseparable part of living among high-rise buildings.

Higher wind loads at ground level between high-rise buildings due to turbulence occur when designers do not calculate in advance the conditions of wind comfort for pedestrians and do not take any measures to protect them. Such measures must include planting trees, installing protective screens and canopies, adjusting the shapes of buildings, etc. At the stage of putting a building model through a wind tunnel, certain activities are worked out by full-scale modeling on a lesser scale.

Myth 5. Along with the appearance of high-rise buildings, the population density is growing, and the standard of living is falling.

The most expensive real estate in the world is concentrated in the most high-rise part of Manhattan, and the standard of living of owners and tenants of residential and office skyscrapers is rather a matter of envy. The same applies to Dubai, Shanghai, Hong Kong, Seoul, and many other mega cities of the world, where the standard of living of the population is steadily increasing along with the increases in the number of high-rise buildings.

You can learn more about the engineering, architectural and other features of high-rise and other buildings at the forum and exhibition 100+ TechnoBuild, which will be held in Yekaterinburg from October 5 to 7, 2021.