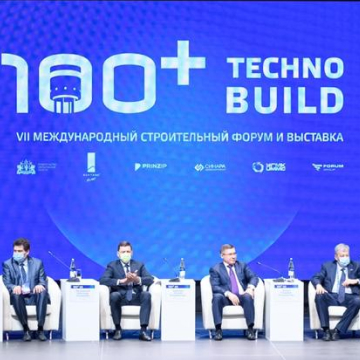 Yekaterinburg successfully hosted the VII International Forum and Exhibiton 100+ TechnoBuild.  Its business program included 90 events, among which were six one-day forums, seven online lectures and workshops by prominent global experts in architecture and urban development as well as nine sessions by major developers. 126 exponents took part in the exhibition.

"Last year, he had almost 11 thousand registrations. This year, we didn't think the number would go above 3 thousand. I'm glad and simultaneously surprised to say that the number of registrations actually reached 8,5 thousand", said Vera Belous, Head of the working group. "We had literally one week to set everything up for online broadcasts of every section because many of our speakers, unexpectedly and for their own reasons, went online. Our broadcasts were watched by 14 thousand people. However, it's impossible to go fully online with these types of events because nothing can replace real-world interaction. A mix of online and live has proved to be a good solution".

One of the main events of the forum was its plenary session on the topic of conscious building where the Minister of Construction, Housing and Utilities of Russia Vladimir Yakushev was one of the participants.

"Conscious Construction consists of thee major aspects. Number one is the responsibility of authorities. The way our cities look is primarily dependent on how well regulatory processes at different levels of government are set up. Number two is the responsibility of developers. Quality of their work and quality of the goals they set are two things that make up the final look of structures which form our towns, cities and other localities. Finally, most importantly, it's about feedback from citizens. Our urban development policies are formed according to opinions of citizens. It's the feedback that allows the first two aspects to work consciously", said the minister when defining the key theme of the forum.

Vladimir Yakushev also took a tour around the 100+ Urban Technology exhibition. The exhibition featured the newest developments in the construction industry as well as solutions of major developers, including those to be implemented in the Universiade-2023 Village construction.

Manufacturers of construction materials, sanitary installations, elevators as well as developers of intellectual systems presented their solutions as well. The exhibition also featured a cluster of small architectural forms provided by the companies of Sverdlovsk region. The manufacturers showcased modern playgrounds, workout spaces, benches with charging spots for smartphones and other urban embetterment elements.